Skip to content
Within the framework of the project “Collective Actions for Water Conservation” sponsored by the United States Agency for International Development (USAID), the training course “Capacity Building on Integrated Management of Water Resources in the Vu Gia – Thu Bon River Basin” was held in Da Nang on June 07, 2022. The training was organized based on the cooperation among the Center for Environment and Community Research (CECR), the Center for Sustainable Development for Water Resources and Climate Change Adaptation, and the Department of Natural Resources and Environment of Da Nang.. 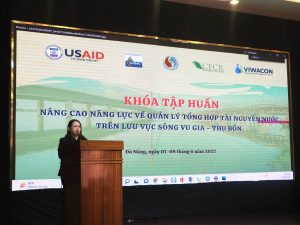 Vu Gia – Thu Bon river basin is known as one of the major river basins in Vietnam, with a total basin area of 10,035 km2. In recent years, the demand for water in the Vu Gia – Thu Bon river basin is increasing constantly, leading to the exploitation of surface and underground water. However, the downstream area of Vu Gia – Thu Bon river is facing many great challenges, one of which is the cyclical and regular water shortage during the dry season, which has been bringing certain impacts on people’s daily life and production activities using water resources in the basin. There are several reasons, objective and subjective, leading to said situation, however, these are some of the main reasons explaining the water shortage:

1. Although the process of inter-reservoir operation on the Vu Gia – Thu Bon river basin has been supplemented and completed in 2019, some provisions for the operation and discharge of water to the downstream of hydropower reservoirs in the basin are not suitable, due to new problems in practice that have not been identified and calculated, specifically: 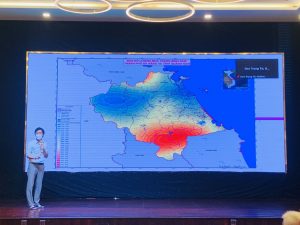 Facing the reality requires the need to strengthen the capacity of water resource management for staff in charge, especially in monitoring the operation of hydropower plants in river basins as well as developing water use plans for different regions. At the same time, it is also important to strengthen coordination and information sharing among stakeholders involved in developing and using water resources in the basin to overcome these inadequacies and shortcomings, meeting new requirements and tasks in this situation.